At age five-and-a-half, while his classmates in Milan, Italy, were playing with toy soldiers, Fabio Pastori was sketching images of Brontosaurus and Tyrannosaurus in his notebooks. But it wasn’t until the 1990s, when Pastori began using traditional painting and drawing techniques to illustrate dinosaurs for paleontologists, publishing projects, museums, educators, and collectors, that what he calls his “real journey into the world of paleoart” got underway. His first drawings of prehistoric animals, done in his now-characteristic hyperreal style, were published by Mike Fredericks in Prehistoric Times magazine in 1990, and Pastori’s illustrations immediately attracted attention for their realism and his innovative use of color. In 2000, Pastori drew a series of concept illustrations for an early version of J. P. Carlson’s graphic novel, Rex Riders, which was then being conceived and pitched as an animated cartoon series. The author recalls seeing the illustrations for the first time and being amazed at the renderings: “At that time, no one illustrated dinosaurs the way that Fabio did. His use of color and perspective was very unusual. The animals literally popped off the page!” Carlson said. Pastori prides himself on his “old-fashioned” refusal to use digital tools or software in his work and today, in addition to making his own art, he is sought after as a teacher of the classical techniques of drawing, illustration, and painting. He spoke with  Fossil News about what’s going on in the world of paleoart, his own work, and his latest project: a hyperreal 3D scale model of Stan the Tyrannosaur.

Fossil News: Let’s start with an issue that I gather is very much at the forefront of your approach and philosophy as an artist and, specifically, as a paleoartist. In a recent post in an online forum, another artist wrote:

When I read criticisms [of paleoart], especially about the external appearance [of someone’s illustration of a creature], I can only laugh because they’re based upon partial information or, at times, information that may be true in one moment, but winds up disproven the next. In all that, we’re losing a fundamental concept: paleoART is art before anything else. The objective of art isn’t to get to the “truth” or the “greatest accuracy possible.” The objective of art is to make the viewer feel something and, through that emotion to transmit ideas…. Realism is in the eye of the beholder…. The next time you look at an image, look first at what it makes you feel. Everything starts from there.” 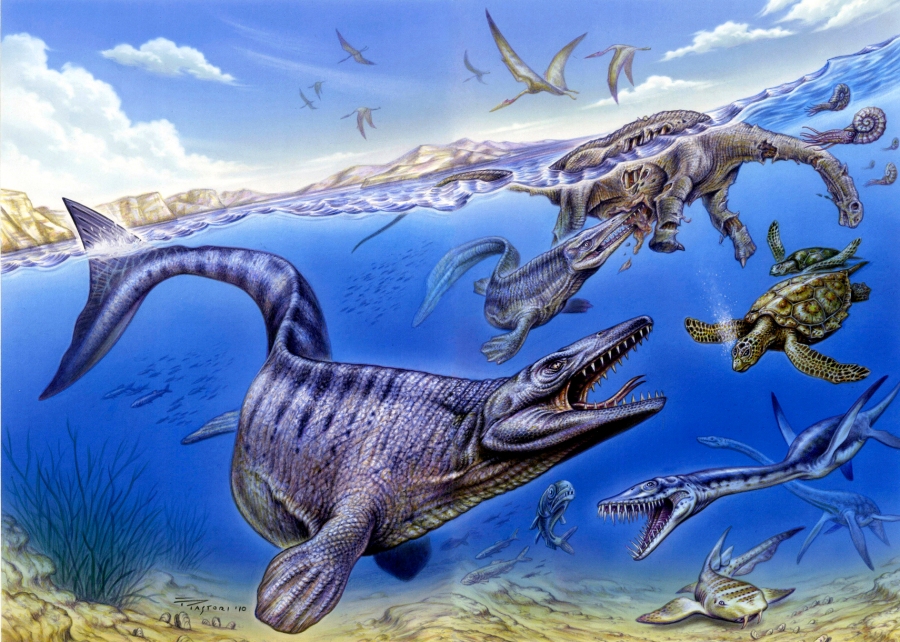 FN: You disagreed fairly strongly with that idea, especially the notion that “the objective isn’t to get to the “truth” or the “greatest accuracy possible.” You responded:

Paleoart is an art form whose purpose is educational, or perhaps it would be better to say that its purpose is to communicate ideas about science to a general public. The paleoartist’s work—just like that work of scientists—is “the illustration of a hypothesis.” If an artist decorates his or her dinosaurs with plates that look like medieval armor, or adds spines or other implausible frills and flounces just because they’re fun or esthetically pleasing, then that artist is drawing for a fantasy comic. Those drawings might well trigger a strong emotional response, but the artists aren’t paleoartists.” I recall you had also said to me that “paleoart is science conducted by an artist.”

Expand upon those ideas, if you would.

Fabio Pastori: For me, paleoart differs from the wider concept of art (and by that I mean pure artistic expression) because it has a specific goal: to be educational/illustrative. Let me try to be clearer. In my work, I experience a sense of enormous responsibility, which artists in the “classical” sense—a Picasso or a Mirò, just to name two—don’t experience. There’s a very simple reason for that. As a paleoartist, I consider myself a “science communicator.” My drawings have a purpose, which is to illustrate—and, therefore, to communicate about—the appearance and behavior of extinct animals, which is something we’ll probably never be able to be 100% sure of anyway, as accurately as current knowledge allows. 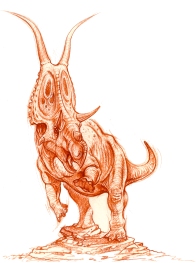 Now, that might lead one naturally to think that, if paleoartists are constrained by what science tells them, then they neither invent nor create and they aren’t true artists. But that’s false. A paleoartist expresses creativity and style in many ways while creating a drawing or life-reconstruction. There’s her or his personal technique, the choice of how to frame the scene, the distance from or nearness to the subject, perspective, personal choices about how to crop the image, light, and the choice of color (though nowadays the paleoartist can’t claim total freedom here either!), and many other factors that are what makes him an Artist with a capital A.

FN: If we think about the people considered the “great” paleoartists of another generation—or, in any case, the ones whose images, almost exclusively of dinosaurs, many of us grew up with (Zdenek Burian or Charles Knight, for example)—we could view their art in some ways as fanciful or, if you like, “inaccurate.” If you consider Burian, Knight, and similar illustrators to be “great artists,” what made them great?

FP: Exactly, exactly. People from my generation (I was born in 1966) grew up just the way you describe, with the timeless work of Zdenek Burian and Charles R. Knight! It would never occur to me to make the slightest criticism of their work, and that’s not just for sentimental reasons. They were geniuses. We can’t call their work “inaccurate” in the historical context in which it was made. What we can say with some care is that the images are obsolete today, given the enormous steps that science has taken since their day, but I want to repeat that they were unrivalled geniuses.

FN: Why dedicate yourself to drawing dinosaurs? Paleoart is glutted with people who illustrate dinosaurs, whereas good, prolific illustrators of invertebrates—or even non-dinosaur vertebrates—are harder to find. I wonder whether all the attention on dinosaurs isn’t a disservice to people’s understanding of prehistoric life: invertebrates were more varied than dinosaurs and many species lived hundreds of millions of years longer than dinosaurs.

FP: When I tell people that my life revolves around a passion for dinosaurs (and for art and drawing), they already think I’m crazy. What do you think they’d say if I told them I couldn’t stop drawing clams? All kidding aside, though, my passion for dinosaurs was spontaneous and came from deep inside me in a way neither psychology nor philosophy can explain. And there it remains. It’s the combined admiration, respect, and reverence that I feel for these amazing animals. They came long before we did, and they lived on our planet when it was still pure. I agree completely about the disservice you mention, but this is probably not the place to get into my feelings about the increasingly shameful, prolific, and senseless “production” of dinosaur images.

FN: In your forum posting, you also wrote that “Exceptional paleoartists exist, both in terms of technique and their scientific knowledge of anatomy, biomechanics, and so forth, but I wouldn’t consider them artists.” Can you explain why?

FP: The first thing I should be sure to make crystal clear is that my statement is in no way meant to disparage or criticize the illustrators whom, in my personal view, I would tend not to call “artists.” Rather, I simply want to define them differently—as “scientific illustrators,” to be specific. Nowadays, “creative,” as a noun, has become a synonym for “artist,” but the lack of those creative freedoms that I mentioned earlier (lighting, color, framing device) is what marks the work of an illustrator, in my view. Still, it is art expressed as a kind of high-level scientific thought rather than as a personal stylistic interpretation. 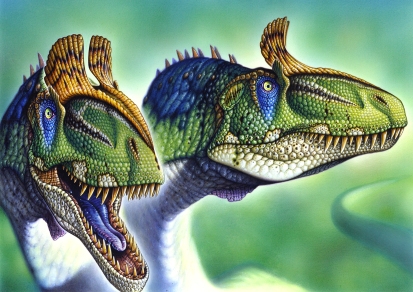 A pair of Cryolophosaurus ellioti, a species recovered from the early Jurassic of Antarctica in 1991. Cryolophosaurus, which possessed a distinctive crest that spanned its entire head, is one of the largest theropods of its time and the first carnivorous dinosaur to be discovered in Antarctica. Acrylic with marten-hair brushes and background airbrushing. Below: Pastori’s bronze sculpture of Cryolophosaurus, designed by him and sculpted by Francesco Salerno, 32 x 24 x 6.5 cm. (12.6 x 9.5 x 2.5″). © Fabio Pastori; used by permission. All rights reserved.

FN: I know you’ve been working on your Cryolophosaurus ellioti sculpture and kits. Is 3D sculpture a new area for you? What artistic goals were you hoping to express by that excursion into sculpture? Are other 3D models coming? 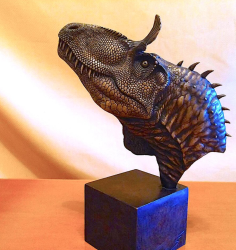 FP: I’d preciously completed drawings and anatomical studies for some miniature dino sculptures under the scientific supervision of paleontologists like Jim Kirkland (the Utah State Paleontologist for the Utah Geological Survey and a Research Associate of the Denver Museum of Natural History), but I wasn’t the one who actually constructed the models. Cryolophosaurus ellioti is the first thing I’ve built in 3D, and it was an experiment I conducted with absolutely no expectations whatever. I imagine the result was successful because it’s the three-dimensional reproduction of one of my most popular drawings. [The model also won Prehistoric Times’ first prize for “Best Prehistoric Animal Model Kit” in 2017. —Ed.]

Now I’m working on a new project for my second sculpture, a full-body model of Tyrannosaurus Stan (STAN BHI 3033, from the Hell Creek Formation, South Dakota, in 1987). My goal is  to reconstruct Tyrannosaurus rex according to the most recent discoveries and the most likely hypotheses.

FN: The “most likely hypotheses’ being … ?

FP: My interpretation is that T. rex was half a moderately good predator (with some excellent strengths but also with a lot of weaknesses) and half an opportunistic carnivore, which is true in living predators as well. Meanwhile, the diatribes over feathers vs. scales are verging on nonsense at this point. There’s no proof whatsoever that T. rex was covered entirely with filamental hair-like feathers just as there’s no proof whatsoever that it was covered entirely in scales. All this is the result of the re-examination of a few patches of fossilized skin impressions from a T. rex that had been in storage at the Houston Museum of Natural Science in Texas for a decade (see, for example, Bell et al., 2017). In fact, the vast majority of the blog articles and non-scientific press about the new study never provided a scale or precise measurements, which were, of course, included in serious scientific papers. If they had, it would have been obvious, as Mark Witton explained last June, that all of the skin patches showed the same thing: “tiny ‘basement scales,’ each less than 1 mm across.” In other words, they would barely have been visible to the naked eye. Leaving aside the head and snout, a reconstruction of T. rex partially covered with filaments (around 65%) rather than scales is much more plausible, for reasons that I don’t think I need to get into here.

Pastori can be reached directly at fabio.pastori@tiscalinet.it, and much more of his work can be seen online at http://www.fabiopastori.it, http://paleopastori.deviantart.com, and
https://www.facebook.com/fabiopastoridinosaurartist.
_______________

An expanded version of this interview appeared in the Fall 2017 issue of Fossil News: The Journal of Avocational Paleontology, pp. 4-15. English translation by Wendell Ricketts.