The fossil I’m curious about is shaped roughly like a Chiclet. But I’m sure it is bone. Not only that, I’m sure it is from the third thoracic vertebra of a rare left-handed female Tyrannosaurus rex who suffered from asthma most of her adult life. 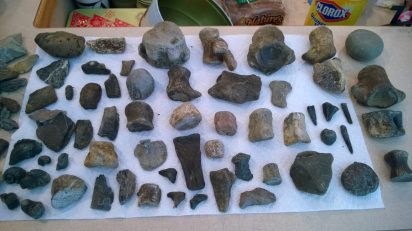 It will take a proud place in my collection of other black pieces of rock, none of them larger than a snacking carrot, which I keep in Tupperware containers in my garage. All my fossils are carefully labeled and sorted. In fact, despite the fact that spoilsports keep telling me my finds cannot be identified, I have, in fact, identified each and every one and catalogued them accordingly: Might Be A Tooth, Probably a Rib of Something, Could Be Taken For A Fossil If You Squint, Almost Definitely Part of a Turtle, Bone (I Don’t Care What They Say), and Mosasaur (my catch-all category). Any reliable information would be welcome.

Here’s another riddle for you guys. This fist-sized chunk is rock hard, so definitely fossilized. Because of the large pores, it reminds me of dinosaur bone. But how did it find its way into an exclusively marine Pleistocene deposit? My guess is that it was uncovered from much older sediments and then washed out to sea. That seems a much more convincing explanation to me than that it is a piece of rock.

I spent more than I care to admit on this slab from a quarry in Wyoming. It’s about five feet on a side. As you can see, it contains four different species of fish, two of them very rare, a palm leaf, a flower, a bird, eleven coprolites, a grouping of beetles in the upper left, the skull of a small iguana in the lower right and, along the bottom edge, a snake trackway. My wife insists that these specimens must all have been found separately and possibly even at different sites and glued onto a single slab, and she says some of them might not even be real. I feel certain they are all exactly where they came to rest millions of years ago. How can I prove I’m right?

Please see the photo I’ve posted of a megalodon tooth, which I bought online. It’s from Morocco. The fossil was very expensive, but now I’m worried it might be a fake. If you look carefully, you can see a tiny serial number carved into the outer edge of the root, and the specimen does smell suspiciously like burning plastic. Still, at 27″ in length, it is the largest Meg any of my friends has ever seen, the preservation is absolutely perfect, and the seller assured me he’d never before found a shark tooth from any species that was bright purple like this one. Does anyone know how to tell a fake tooth from a real one?

Need some help with IDs. The stuff in the photos comes from Nevada. Probably. I’ve thrown in a greasy, tarnished coin for scale (might be a quarter, might be a dime; I really don’t recall). Anyway, the coins of all nations are exactly the same size, and any old piece of money is good enough to tell you how big something is. And no, before anyone starts flaming me: Not only do I not own a metric ruler, I’m not interested in your pinko units of measurement, either.

Does anyone know what this is? Yes, the specimen is extremely water worn because it comes from a local river where approximately 3,783 people collect each weekend, except during the summer, when that number doubles. Still, I’ve been lucky to pull things out of there that no one else has been able to find, as the second photograph (a shoebox full of pebbles) demonstrates.

I don’t know if you can help me identify the specimen pictured here. I bought it at a garage sale, but the only thing the seller could tell me is that it was given to her years ago by someone whose great-uncle bought it from a rock shop in the United States, though it might have been Canada, Australia, or Burkina Faso. I can reliably date it to somewhere between the Ordovician and the Oligocene. I hope the fact that the photo is black and entirely out of focus won’t be a problem. Someone told me it was an extremely rare trilobite, but someone else whom I respect assured me it was probably a slightly flattened juvenile creodont skull.

This photo shows an example from my collection of brachiopods. As far as I’m concerned, anything with two valves is a brachiopod. I know, people keep telling me that shallow marine exposures after the Permian are much more likely to contain clams, but aren’t brachiopods clams? I mean, bi-valve means two valves, right? So I’m just saying…. Anyway, science doesn’t know everything. This one is an unusual specimen from the Cretaceous of Texas that superficially looks a lot like an oyster. But it’s still a brachiopod. Unless it’s a fossilized turtle skull. I’m wondering if anyone can tell me something about it that doesn’t contradict anything I am already convinced of.

(Statement by Jack Kallmeyer and Bill Heimbrock of the Dry Dredgers organization:) “Occasionally, the Dry Dredgers are asked to respond to the assertion that a photo taken by NASA’s Mars Exploration Rover, Opportunity, is of a crinoid fossil.  This is largely due to a web site that references the Cincinnatian crinoid photos on drydredgers.org. Alas, I can be fairly certain that the image in the photo is not crinoidal. For 100% certainty I would need to have it in my hand which isn’t very likely…. As much as we would like to do so, it is really not possible to positively identify fossils from photographs…. Sedimentary structures and broken pieces of larger fossils often look very much like other legitimate fossils. It takes a certain amount of experience to determine the difference. Even when explaining that to a collector, the collector oftentimes will still maintain that we are wrong and (she or he) has collected some rare, never-before-seen specimen.” 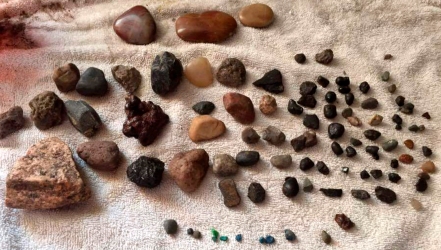 Another excellent day of fossil hunting at the North Springs Sulphur Green Bent Stream River Run Peace Park, as these 47 photos of random fragments of gray, brown, and darker brown rock demonstrate. Any help with IDs would be appreciated.

What did I find here? I know accurate collecting data are important, so I can tell you this is from New York. I conclude that it has cell structures, aware as I am that cells are commonly preserved in fossils and judging by the fact that I’ve looked at it with my naked eye.

In my collection, I have many specimens of petrified sea cucumbers, stone deer hearts, calcified worms, and silicified bees’ nests. My prized possession, though, is a flat, circular specimen, which is obviously fossilized cow flop. Can anyone tell me the species? I’ll send additional photos privately if necessary — I’m not very good at uploading.